Lectures in the proximity to Abd-ru-shin
by Dr. Kurt Illig

Lectures and Statements
by Abd-ru-shin 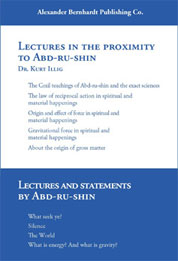 Scientific Knowledge in the Background of the Laws of Nature

Man’s faith, as expressed through his religious philosophy, has always stood apart from the recognitions of science. Even though each religious philosophy bases its traditions on happenings in creation and strives to describe them under certain sub-aspects, the superordinate Laws which manifest themselves in Creation remain unnoticed or are denied to a large extent in the religious teachings. As a result only the laid down dogmas could take on form; these dogmas on their part deviate from the existence of the natural mobility of creation, thus demand a blind faith. Science, on the other hand, relies on verifiable phenomena within creation and on the Laws which can be deduced from them. How far religious philosophy and science deviate from one another can be seen for instance in the diversity of the assumptions as to how life began on earth. In this context one might consider the actual dispute about "creationism", which has lead to irreconcilable confrontations in many places.

Faith and religious philosophy however must not remain separated from science for both approaches fundamentally endeavour to make creation and the concept of a Creator anchored therein, discernible to humanity in a comprehensible and accessible manner. All that exists in Creation is subject to the strict order of this Creation, which – emanating from out of the Creator – always remains unchanged on all planes whether big or small, whether in the visible or in the invisible world, and according to which all developments and happenings have to take place in an absolute consistency and coherence.

To observe and recognise this order is man’s main task. A help towards this recognition has been provided by a work written at the beginning of the 1920s and entitled: "In The Light of Truth" – The Grail Message by Abd-ru-shin. The author of this work, Oskar Ernst Bernhardt (1875 - 1941), in the consciousness of being "Abd-ru-shin", carried within himself a high knowledge, and out of this perspective he felt urged to bring to humanity new fundamental explanations about creation and the laws working within it, which finally lead to a clear recognition of the existence of the Creator. It is a work which directly addresses the individual human being who faintly senses within himself that this great reality truly exists, and whom readymade answers can never satisfy.

Dr Kurt Illig, whose professional career was grounded in the sciences, had studied Abd-ru-shin’s publications, and – through the congruity of their content – had attained the conviction of the irrefutability of the knowledge transmitted therein. At the same time it was his permanent concern to verify this knowledge on the basis of the established scientific laws – including the discoveries of nuclear and quantum physics which then for the first time started to be discussed by a larger public. In examining thoroughly the writings of Abd-ru-shin, as well as the scientific discussions of his time, Dr Kurt Illig found the keys to answers, which in turn he presented in his writings. In spite of the scientific progress of the last decades, Dr Kurt Illig’s articles, as they were published in the 1920s remain relevant as ever. Besides the reprinting of these articles this brochure contains a number of treatises from the work "In The Light of Truth" – The Grail Message – by Abd-ru-shin, which allows the interested reader to delve more deeply into the background of this knowledge and through this to draw his personal conclusions.

back to “Other Writings”