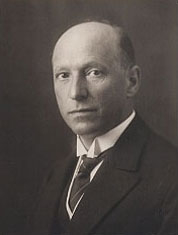 Author of the work “In the Light of Truth”, The Grail Message

Many people have the wish to learn more about the author of a book. Often this wish is based on the thought of being able to draw conclusions about the respective book from the descrip­tions of an author’s back­ground, in order to aid the decision to buy or to read the book.

In the work “In the Light of Truth – the Grail Message” Abd-ru-shin makes the state­ment:

“Every inwardly free man will always assess a matter or a teaching according to what it brings, not according to who brings it. … Gold is gold, whether a prince or a beggar holds it in his hand.”

These words, the accuracy of which is in­disputable, illustrate how bound a man of today shows himself if he allows himself to be guided solely by the descrip­tions of an author’s back­ground.

A book that is called “In the Light of Truth – the Grail Message” and that would like to give clarification about the actual meaning of life as a human being, particularly demands a neutral assess­ment. After getting to know the state­ments which the author makes in his work, it is left to the reader now also to classify the author himself in his work.

The illumination of the truth always requires open­ness and far­sighted­ness on the part of the reader. Many an experience has already taught us human beings that after all more things exist than we can grasp with our eyes and ears, with our concepts of time and space. This includes the experiencing of a suddenly rising presenti­ment or of the effect of a guidance which crossed our life’s path.

For Abd-ru-shin, the main wish was to give his work, the Grail Message, as a sign­post to the humanity opened to it. In the following, individual stages of his life are listed:

Abd-ru-shin was born on 18th April 1875 and received the civil name Oskar Ernst Bernhardt. His birthplace Bischofs­werda, located near Dresden in Germany, was the place of his child­hood as well as the place of his schooling and professional education. After this he left the loving care of his parents’ house and dedicated himself to the pro­fession he had learnt which was that of a business­man. The commercial activity then enabled him to travel to different countries in Europe as well as in North America. Whilst doing so he began to write down the experiences and impressions of these journeys as well as personal experiences from living together with his fellow men. In this way, he combined his commercial profession with his ever-increasing inclination to express his thoughts as a writer.

In the year 1921, there awoke in Oskar Ernst Bernhardt the conscious­ness of a former earth-life and of his intended task on earth, which he had to fulfil. The name Abd-ru-shin is also connected with this conscious­ness. Oskar Ernst Bernhardt there­fore ended his business activities in order to be able to devote himself completely to the field of activity as Abd-ru-shin.

Almost two years later – in 1923 – he published the first essays under the name “Abdruschin”, which called humanity to spiritual awakening. Initially, these essays were bound in booklets which bore the title “Gralsblätter” (Grail Leaflets). In the course of 1926, a collection of these essays appeared in book form with the title “In the Light of Truth – the New Grail Message – by Abdruschin”. In later editions, the description “new” was omitted so that all editions after 1931 were called “In the Light of Truth – the Grail Message”. In addition, the spelling of the author’s name changed. From 1937 onwards, the spelling “Abd-ru-shin”, which was the only valid spelling from this time on, was used in publications.

In accompani­ment to the publication of the “Gralsblätter” and the “Grail Message” Abd-ru-shin initially also held public lectures, in order to make his thoughts accessible to his fellow men. As a result of the abundance of essays that Abd-ru-shin increasingly felt urged to write, however, he did not give any further public lectures.

Abd-ru-shin’s essays brought about an inner, spiritual open­ness in his many readers which also became noticeable in many areas of life. In Abd-ru-shin himself the urge became ever stronger to seek the point of anchorage on earth destined for the Message from out of the Grail. Led by an inner guidance, he began to search for this place. As in all things that arise from non-material guidance, here also a corresponding earthly hint was necessary in order to find what was sought. Through a sales notice in which a house in the secluded mountain region of North Tyrol in Austria was offered, Abd-ru-shin recognised the sought-after place in the year 1928.

The essays of Abd-ru-shin which in a clear, objective and intellectually compre­hensible way explain the meaning of life, further­more lead also to a divining of God that until then was unknown to humanity. The basis for this is the recognising and observing of the laws of nature and of creation, which are the perceptible expression of the will of God.

Out of the newly gained recognitions which enrich life and which, in bliss, allow great gratitude to arise, there also forms in the human being the urging desire to honour the Creator in a suitable way and to express this gratitude to him. For this purpose, Abd-ru-shin created the possibility for Hours of Worship and – in an enhanced form – for Grail Festivals.

The Grail Festivals, which for many spiritually opened human beings become a conscious experiencing of divine grace, are still today the great high points in the course of the year of such readers of the Grail Message. Very special for them are also the joint Hours of Worship which take place on Sundays.

Abd-ru-shin’s greatest endeavour with regard to his fellow men was to stimulate them through his essays to a more conscious and freer life. The individual human being was meant to recognise that he alone is responsible for his life and, further­more, for his entire spiritual existence. Of relevance in this regard is also Abd-ru-shin’s call to distance oneself from all previously existing constraints and restrictions in order consciously to experience one’s own life.

The reference to the fact that no earthly organisation is required between the human being and the Creator was not looked upon kindly by the church leaders and caused consider­able enmity towards Abd-ru-shin. In addition, Abd-ru-shin’s encourage­ment for independent thinking and objective examining, which leads man away from influencing opinions, displeased political rulers. Thus, in 1936, the sale of the work “In the Light of Truth – the Grail Message” was for­bidden in National Socialist Germany, and the publishing house that had existed in Munich for the printing of this work had to be closed down.

When in March 1938 Austria was annexed to the German Reich, this brought about the end of what had previously existed for Abd-ru-shin and his work. Abd-ru-shin was arrested by the National Socialists and imprisoned in Innsbruck. The insinuations and accusations that had caused the imprison­ment, however, finally turned out not to correspond to the truth, and this led to the release of Abd-ru-shin. The Grail Settlement on Vomper­berg which had developed around Abd-ru-shin’s residence, as well as his entire personal possessions and also that of his family were never­theless confiscated and transferred to the Austrian state. Abd-ru-shin and his family had to leave Austria and were assigned a forced residence in the east of Germany. All remaining residents were also expelled from the Grail Settlement. The dissemi­nation of Abd-ru-shin’s work as well as personal contact with Abd-ru-shin were largely prevented by the coercion of the National Socialist rulers.

Abd-ru-shin’s message from out of the Grail had reached very many readers in different countries and had caused in these readers a change in their everyday lives. Living and experiencing became more conscious which led to a deepened recognising of genuine human values. The stronger perception of spiritual guidance also helped these people to bear the difficult fateful years of the Second World War.

Therefore, in the years 1939 and 1940, Abd-ru-shin created a printing template for the work “In the Light of Truth – the Grail Message” which alone was to be valid for the future and which until today is dissemi­nated as the “Edition of the Last Hand”. The Grail Message was to reach the readers in three volumes. The first print of this edition, which made the work accessible to readers once more, could only take place in the year 1949.

As Abd-ru-shin, Oskar Ernst Bernhardt had brought humanity the message from out of the Grail. The help which Abd-ru-shin had offered to humanity over and beyond that was not fully recognised by them. In this conscious­ness, Abd-ru-shin detached himself from his earthly body on 6th December 1941. At that time, the burial of his body took place in the cemetery of his birth­place, in Bischofswerda.

In the summer of 1949, with great effort, it was possible to transfer Abd-ru-shin’s body from Bischofs­werda to the Grail Settlement Vomper­berg. A tomb in the form of a pyramid was erected, in the crypt of which the earthly body of Abd-ru-shin was reburied.

Abd-ru-shin was a strict opponent of every dogma as well as of all sectarianism. He was also resolutely opposed to any form of personality cult. The only thing that mattered to him was that he lived what he conveyed to his readers in his works.